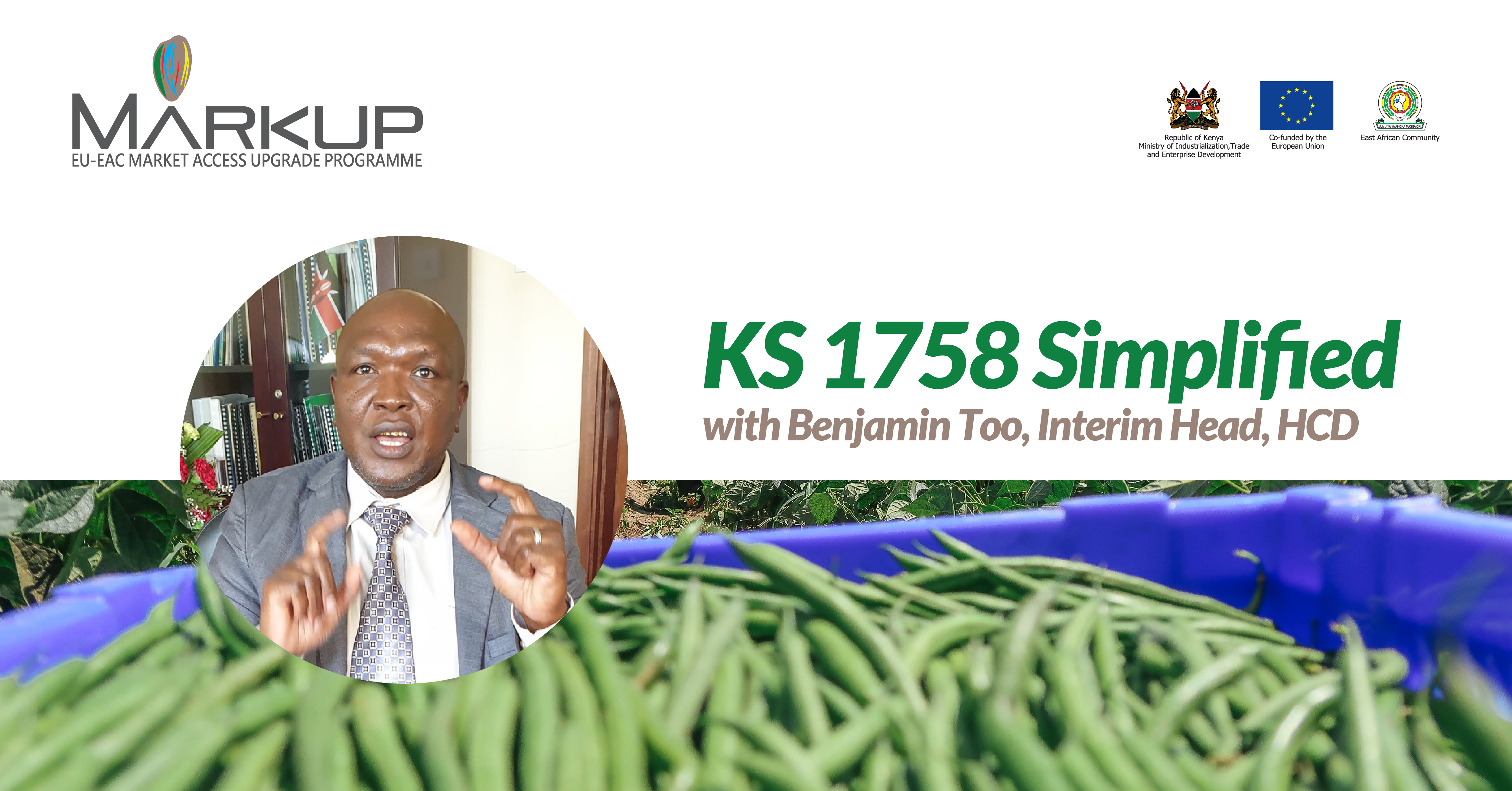 If you are in the horticulture industry, or want to venture into it, then you may have heard about the KS1758. Sometimes referred to as ‘Horticulture Code of Conduct’, KS1758 is the standard that covers horticulture standards, along the value chains. Well, while the name may sound complex, the standards, as experts put it, are basic guidelines, and easy to adhere to.

We spoke to Benjamin Tito, the Interim Head of Horticultural Crops Directorate (HCD) who simplified KS1758.

It is a standard that gives guidance on how production should be done, and how crops should be handled from production, processing to the market. KS1758 is benchmarked on EuroGAP, which was the initial formation of Good Agricultural Practices (GAP), but extended to Global GAP, which covers the entire trade globally. Although KS1758 is domicile in Kenya, it borrows heavily from the Global GAP. KS1758 is divided into two parts; first part which covers Floriculture, and the second one, which covers fruits, vegetables, herbs and spices.

Standards are very important, right from production. So what should producers observe at this level?

Farmers should be keen while doing site selection. They should not produce food in areas which were formally occupied by factories for example, because the soil may have retained harmful residuals. Irrigation water should be clean and free from contaminants.

Farmers should avoid over use of chemicals. They should use the right chemicals for the right purpose, and keenly follow instructions as provided by the chemical manufacturers. This way, they avoid exceeding Maximum Residue Levels (MRLs), which has been a major challenge especially in accessing international markets. Producers must always observe the right pre-harvest intervals as this allows molecules of the pesticides to breakdown before harvesting.

Banned pesticides should never be used. Producers should always use pesticides which are specifically authorized byPest Control Products Board (PCPB) for use on particular crops.

Often, Produce needs to be transported from the farm to processing areas. What are some of the things that KS1758 address at this stage?

Vehicles for transporting produce should be designed in a way that they are easy to clean, and do not allow dust, or any other contaminants, to get in. The produce should also be put in sealable containers.

Cool temperatures should be maintained while produce is being transported, to maintain freshness.

How about at the Pack House?

Workers in the pack house should always wear protective gear, overall, head gear and gumboots. They should not wear makeup, and jewelry, and their nails must be kept short.

So much about the requirements by KS1758, what are you doing to ensure that all stakeholders are well informed about it?

HCD is actively involved in training stakeholders on KS1758 and other issues concerning food safety. Food safety and standards go hand in hand. Currently, plans are underway to carry out intensive training on GAP in partnership with European Union (EU)-funded Market Access Upgrade Program (MARKUP). The program is implemented in 12 counties, by United Nations Industrial Development Organisation in partnership with the government and the private sector. The training will offer stakeholders to have theoretical and practical knowledge on GAP, KS1758 included.