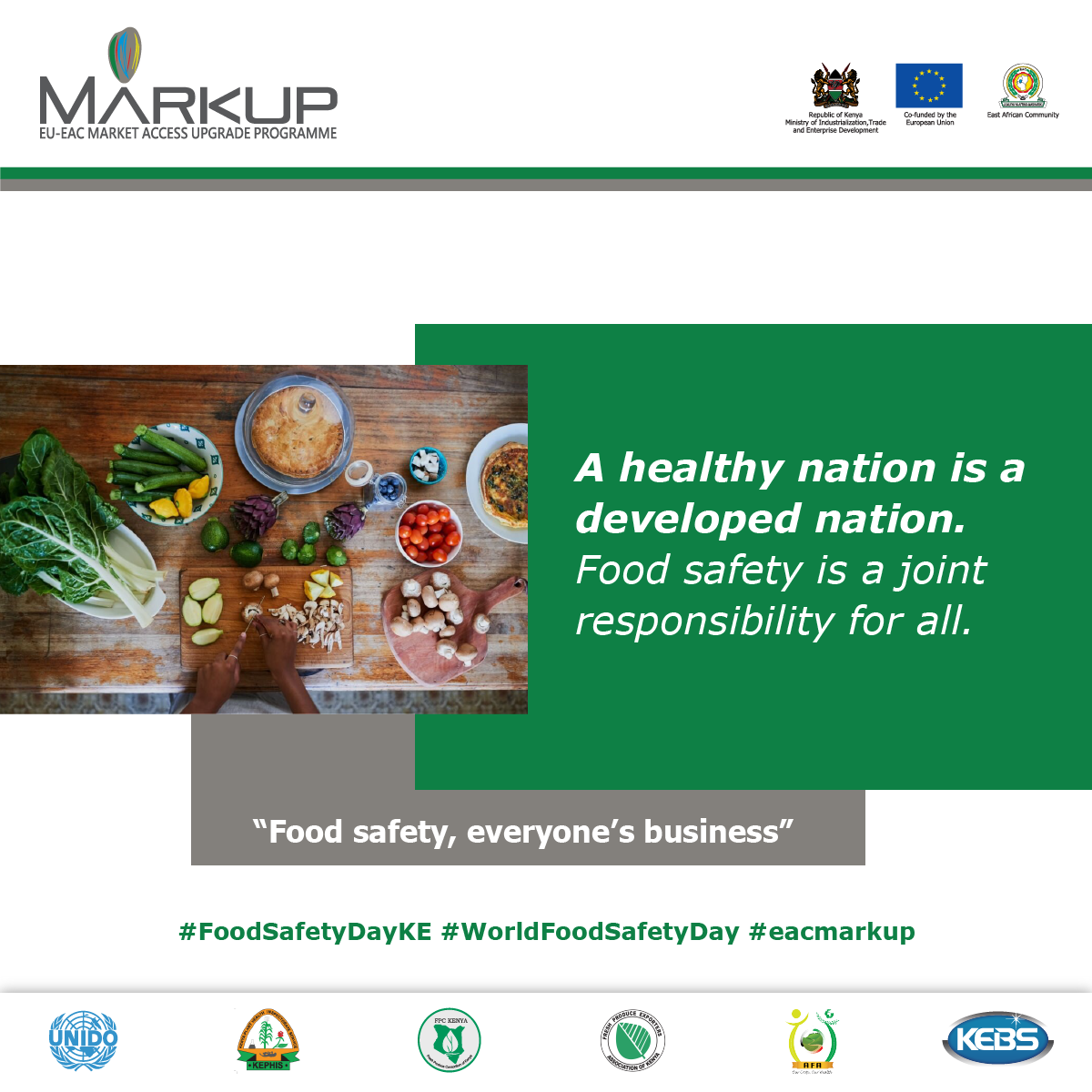 As the world marks the second WFSD today, EU has been in the fore front supporting this important sector, which affects humans in health and wealth.

In a special way and in the wake of Covid19, Kenya joins the world in marking this day, which basically touches the lives of all across the food value chain.

For close to two months now, a EU-funded project has been actively advocating for food safety measures especially in the wake of Covid19.

This week though, the Market Access Upgrade Program (MARKUP), intensified the campaign, in line with the World Food Safety Day (WFSD).

MARKUP is implemented by the United Nations Industrial Development Organisation (UNIDO) in partnership with the ministry of Agriculture and the State Department of Trade.

The project aims at promoting competitiveness for Kenyan produce locally, within the East African Region as well as in the international arena.

Earlier this week, this campaighn went ahead to involve social media influencers, on a cooking demo for different delicacies, with keen interest in showing food safety and its importance.

“The chefs, all who have a huge following on social media, are supposed to show different ways in which they observe food safety,” says Stefano Sedola, UNIDO’S Chief Technical Advisor for MARKUP project

He adds that different influencers had been selected to reach out to various demographical groups, depending on the age groups of their followers on social media.

Sedola called for collective responsibility on food safety issues, saying it is the duty of governments, development organisations, individuals, professionals and all to take responsibility.

According to the World Health Organisation (WHO), about 600 million people in the world – almost 1 in 10 – fall ill after eating contaminated food and 420 000 die every year.

Children under 5, WHO says, carry 40 percent of the foodborne disease burden, with 125 000 deaths every year, while an estimated 700 000 people die around the globe because of antimicrobial resistant infections

Foodborne illnesses are usually infectious or toxic in nature and caused by bacteria, viruses, parasites or chemical substances entering the body through contaminated food or water.

“Safe food is critical, not only to better health and food security, but also for livelihoods, economic development, trade and the international reputation of every country,” reads a WHO report in part.

The report recommends good hygiene practices in the food and agricultural sectors in order to reduce the emergence and spread of foodborne diseases.

It further calls for better data indicating that this is needed to understand the far-reaching impacts of unsafe food.

As part of its food safety and WFSD campaign, MARKUP Kenya has been calling for hygienic measures which as need to wash hands before handling food, and to clean fruits and vegetable with clean, running water.

Other messages include proper transportation and storage of different food types in order to keep them from contamination.

MARKUP team has also been part of the larger national food safety committee which include government ministries, government institutions, private sector as well as development organisations.

“Food safety issues must become a day to day practice rather than a one day time,” says Sedola, adding that communication creates a key role in captivating a culture of food safety practices along the value chain.

With safe food, he adds, there is an assurance of better health among consumers, and economic growth for traders along the food chain.