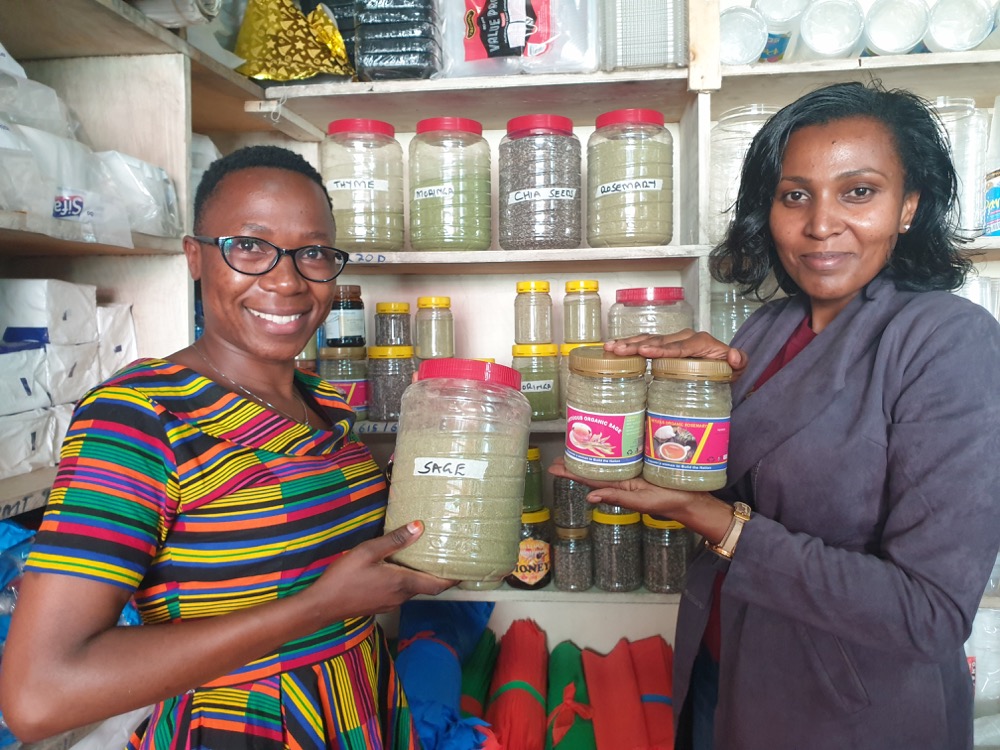 The duo are part of a ten-member Virtuous Women Group, who have come in rescue of herbs farmers who lost market due to the Covid 19. Additionally, this group, whose one member is a professional nutritionist, is offering nutritional solutions especially to people with special dietary needs.

Bottle by bottle, they fill the sage, adding labels with information such as net weight, and the benefits of using the herbs. They have also packaged other herbs such as dried and ground mint, rosemary as well as chia seeds.

Some of the packaged herbs are destined to direct delivery to clients who have already booked them, while the rest will be stocked at a shop in Nakuru’s Central Business District.

They invested Sh10,000 into this business, about nine months  ago, and are now making an average of Sh80,000 monthly.

Their story however, is not just about herbs processing. It is about a nutritionist, who often had to refer her clients to the supermarkets for herbs, but always felt there was an opportunity to ensure that she would trace the same from farm to the table.

“I often wondered if the products in the outlets where I referred my clients were organic or maybe they could be laced with pesticides,” recalls Irene

Interestingly, through one of the members of the Virtuous Women group, she learnt of farmers who were doing herbs production in Njoro.

The farmers do not only produce organically, but were almost giving up on ever getting a market for their produce.

“We had been contracted by an exporting company to farm herbs back in 2019,” recalls Joseph Mwangi, a farmer from Mukungugu village in Njoro, Nakuru County

He had hoped to sell to the company, whose identity he declined to disclose, but the buyer vanished, citing lack of market, occasioned by the Covid19 pandemic.

“I thought that the fact that I signed a contact, would ensure a guaranteed market for the produce, but unfortunately, the potential buyer breached our agreement,” says Mutira

He had considered uprooting his two acres of different herbs, until members of the Virtuous Women Group came knocking at his farm.

Even with the new hope of getting a market locally, Mutira says he is still yearning to learn more about this relatively new agricultural venture.

“If only I had knowledge of an alternative market locally, regionally or even internationally, I would not have suffered the losses I did after my potential buyer withdrew,” says Mutira

Both the women group and farmers are likely to directly or indirectly benefit from a European Union (EU)- supported program which will be supporting capacity along herbs and spices value chain in Nakuru County.

The Market Access Upgrade Program (MARKUP) Kenya, the project is implemented by the United Nations Industrial Development Organisation (UNIDO), in partnership with the private sector and the government.

For herbs and spices sector, the program will especially strife to address issues of aflatoxin, post- harvest management, Good Agricultural Practices (GAP), market access among others.

“The project is highly keen on empowering women as they are key pillars to the economy, and the youth as they not only have potential now, but also in the future” says Maina Karuiru, MARKUP Kenya National Coordinator.

He notes that women account for the highest number of labour supply in the horticulture sector, adding that MARKUP Kenya will seek to empower them in a bid to reduce poverty.

The youth, he adds, have numerous opportunities in the horticulture and nuts sector, from production, processing to marketing. These opportunities need to be tapped in a bid to create employment and enhance empowerment.