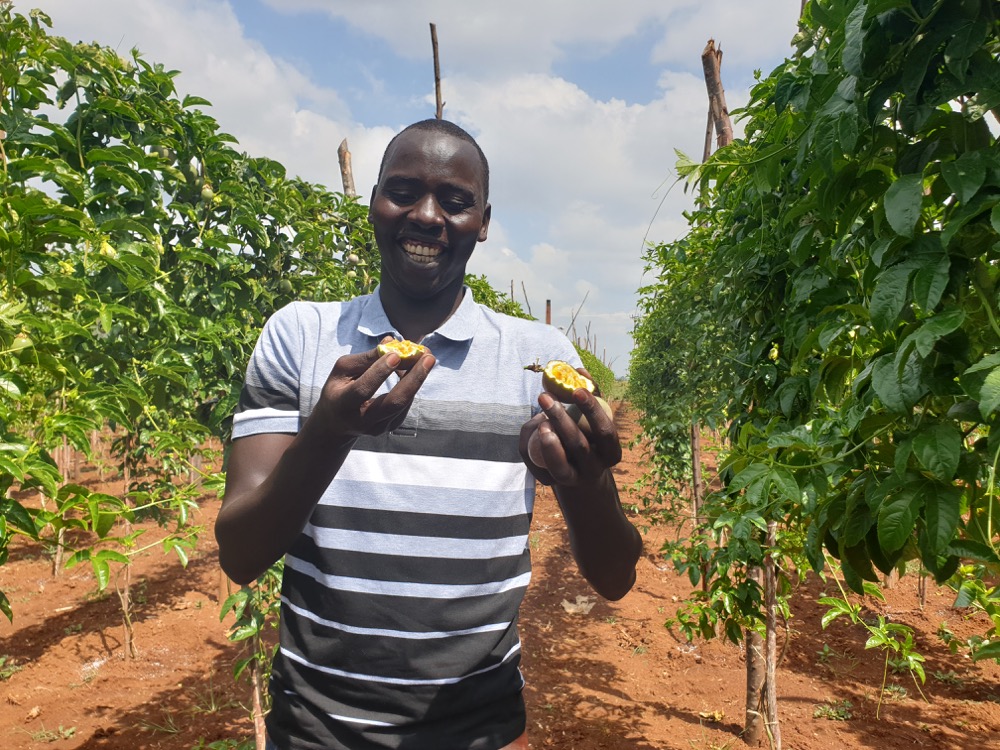 In marking the World Youth Skills Day, EU-funded MARKUP Kenya communication team spent time with Edwin Rono, 32, who has beaten all odds to venture into passion fruits farming. This is especially with the projects, aim to empower youth and women, across selected value chains in the 12 counties where it is implemented.

Based in Serenget, along the Eldoret-Moiben road, Rono accompanies his workers, most of whom are youthful, in attending the orchard.

Some of them, mostly women, are picking fruits, and pruning the crop, while others, mostly men, are applying top dressing fertilizer. In total, Rono has 26 employees, spread across his three farms. The acreage of all the farms totals to 14.

He harvests about 1,200 kilograms of fruits weekly from this specific farm, and sells at between Sh60-Sh120, depending on demand and supply.

His main market is Uganda, he says and the market experienced worse condition during the recent elections in the country, when prices dropped to between Sh10-Sh20 per kilogram.

As the World Youth Skills Day is marked today globally, Rono urges young people to embrace agribusiness as a way of enhancing their talents, earning a living and empowering communities.

“Young people are innovative and dynamic, and should therefore use these attributes to enhance skills even in sectors that are considered informal,” says Rono.

Rono hopes to benefit from the EU-supported MARKUP Kenya, through market linkage. Although many young people are hardworking, he notes, they lack resources, and mentorship, which he recommends and necessary support to motivate and inspire the youth.

“I currently rely on middle men from Uganda, but would be interested to know how I can sell directly to the international market,” says Rono

If he gets market linkage, Rono says he will increase acreage to 40, employ more youths and women, and mentor others to venture in passion fruits production.

For planting materials, Rono harvests fruits, extracts seeds and plants in a nursery, before transplanting. In supporting the passion fruits value chain, MARKUP Kenya has engaged experts from Kenya Agricultural and Research Organisation (KALRO) who will work with certified nurseries to develop and distribute clean planting materials for passion fruits.

Stability among youths, she adds, comes in handy towards curbing crimes and criminal activities such as terrorism.

Noting that about 75 percent of youths are unemployed, Linet says MARKUP Kenya will attract them to agriculture sector, as a viable and interesting way of creating self-employment as well as opportunities to employ young people.

To specifically reach out to the youth, MARKUP Kenya will run several podcasts and influencer programs which will be informative and educative to promote agriculture.

“Through MARKUP Kenya, we will be able to attract youth to agriculture and promote it (agriculture) as a viable and interesting way for youth to either be employees on or off farms, or be engaged in agribusiness directly,” notes Linet

In support of young people in passion fruits farming, Uasin Gishu county government has been assisting youth groups with passion fruits seedlings and farm inputs in a bid to empower and encourage them to embrace agribusiness.

The county Agriculture Deputy Director, who doubles as Agribusiness Officer, Ismael Asowa, notes that passion fruits was identified as a high value crop.

“In the financial year 2019-2020, the county government recruited 120 groups, each of which received 700 seedlings to plant in one acre,” says Asowa, adding that the groups further received fertilizer, agrochemicals, water tanks among other supportive inputs and items.

Among the groups which received support from the county government is Kulongei in Kapsabet, which has 15 members, 11 of whom are youth.

Already this group planted seedlings in May, and expect to harvest in the next 16 months. Like Rono, group chairman Richard Kiprop says he hopes to get market linkage through the MARKUP Kenya program. He also hopes that the group will be empowered to do value addition, such as passion fruits pulp. This way, he notes, the group will not only become a motivation to young people, create jobs, but also have a market for other farmers.

Both Rono and this group, say they also would like to get access to water, as passion fruits need irrigation, yet climate change often cause unpredictable rainfall patterns and prolonged dry periods, especially in the months of January and February.

“We welcome MARKUP Kenya to identify the shinning groups and support them in their quest to thrive in the passion fruits agribusiness,” says Asowa, adding that such groups would act as examples to others.

The county’s support of groups in passion fruits production, Asowa notes, is likely to trigger increased production. This, he adds, causes the need for infrastructural development such as construction of collection centers. He urges development partners to support in filling such gaps, as a way of promoting this lucrative sector.

He urges young people to take up agribusiness as a full or part-time career, noting that it does not necessarily need specialized skills or education, and therefore, fits youths across all demographics.

Asowa advises youths to take advantage of available funding opportunities, including the government’s Youth Entrepreneurship Fund, which has an attractive interest rate of just five percent.